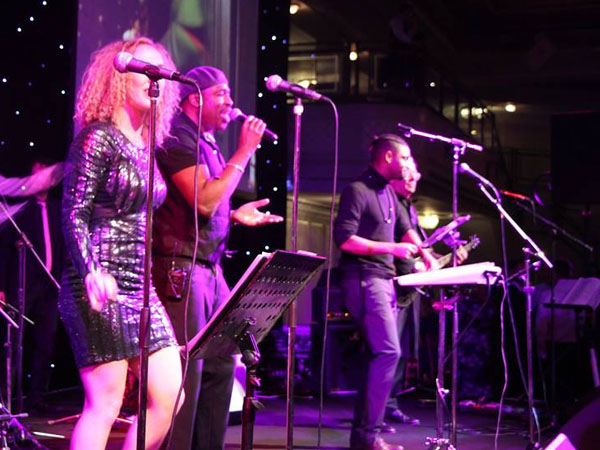 Formed by the charismatic Val Johnson, Zig Zag is the band to guarantee the success of any corporate or private event. Zig Zag brings together exceptional session musicians who have worked with the likes of The Who, Jools Holland, All Saints, Jamiroquai, Blur, The Spice Girls, Van Morrison, Incognito, Tony Hadley, ABC and the Brand New Heavies.  Zig Zag has supported artists such as Whitney Houston [twice], Tony Hadley, Shirley Bassey, Joaquin Cortes, Belinda Carlisle, Billy Ocean, Lulu and Sir Elton John on stage.

Zig Zag is also the only function band to boast a James Bond movie credit performing as the Russian Mafia group in ‘GoldenEye’!

In the corporate world, Zig Zag has gained a luminary reputation. Notable previous events include: New Year’s Eve in Dubai for the prestigious Jebel Ali Golf Resort & Spa – 8 times, the Pink Ribbon Ball at the Dorchester; supporting Whitney Houston in Barcelona for Toyota; performing for Zebra Technologies in Athens; performing for Microsoft in Atlanta and impressive events for Tetra Pak in Italy and Sweden and on board a private Liner for the 50th Birthday Anniversary. The Daisy Ball at the Grosvenor House Hotel for many years. The list goes on & on.