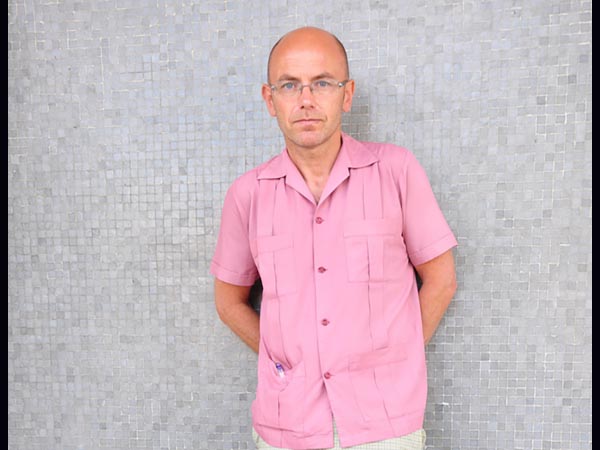 Wayne’s is a colourful story of rags-to-Red or Dead, from Camden Market to London Fashion Week and beyond. Multi-talented; fashion designer, designer for housing projects, inspirational entrepreneur and supporter of creatively led regeneration worldwide, Wayne’s impeccable style and wit (that often has the audience in stitches) are perfect for any event.

This inspirational speaker covers topics such as;

Wayne can also host your event. Whether it be an awards ceremony or a business conference. Plus, he looks fantastic in black tie…

With a career spanning four decades in the design industry, Wayne Hemingway has a fair few stories to tell and lessons to give – and people love to hear them. His talks are insightful, thought-provoking, inspiring, often hilarious and always truthful, warts and all.

Wayne’s rise to success was a rather unusual one, with his big break on a Camden market stall and a segue into housing design due to a scathing piece he wrote for The Independent. Audiences are riveted by his rags-to-Red or Dead tale and how Wayne has continued to push himself creatively, wherever his career may take him.

The HemingwayDesign team have led on and have extensive knowledge of creatively led regeneration worldwide. Wayne talks about creative led regeneration, bravery and generosity in  design that is happening from the Mitte in Berlin and Margate whilst taking in Brooklyn and Blackburn.

Described by many as the most ambitious and coolest festival start-up ever, this is the story of The Vintage Festival: identifying an opportunity in the market, then designing and delivering a summer festival for 50,000 people from scratch. The assembly of the team of designers, collaborators, bands, artists and designers, volunteers, plus the viral and street-led campaign, is an amazing and visually stunning chain of events, full of disasters and triumphs. Now an internationally recognised brand with some interesting spin-offs (including the Classic Car Boot Sale and Festival of Thrift) and a leading name in the competitive festival market, Vintage is the events arm to HemingwayDesign and has a string of successes to its name, including the official The Queen’s Diamond Jubilee Pageant Festival in June 2012 for 70,000 in Battersea Park and the Transatlantic 175 event that attracted 250,000 to Liverpool’s Waterfront in 2015.

“This modern tale of creating a multi-faceted brand focusing on heritage but using modern technology and forward thinking marketing techniques is exciting.”

“I had the pleasure of listening to Wayne Hemingway on Wednesday. He was performing a Masterclass in Events and Festivals – a two-hour presentation to an interested audience – but I wish that I could have somehow bottled his enthusiasm and words and sent them off to every career advisor, teacher and politician in the land.”

Social and Cultural Responsibility of Companies, Corporations and Individuals:

Having learnt how large corporations increasingly care and share their belief about ‘improving things that matter in life’. They have worked with McDonald’s, Coca Cola, Cafe Direct and others on responsible products, and the many avenues to explore there.