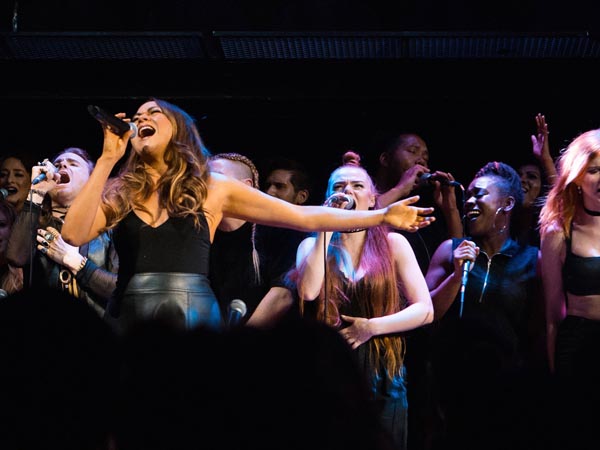 The meteoric rise of Urban Voices Collective shows no sign of slowing down. With choir members recently performing at Harry & Megan’s wedding, at the MTV EMAS alongside Demi Lovato, on the X Factor with Sigma & Rita Ora, a UK tour with Diversity and performing on the Fashion Theatre main stage at The Clothes Show. Other credits include The BBC Proms with Paloma Faith, The BAFTAS and singing the Official Anthem at the opening of the Invictus Games. They have also performed at The Royal Variety Performance and in front of an estimated worldwide television audience of 750 million viewers at The London 2012 Olympic closing ceremony.

Born out of a desire to create a unique sound which fuses traditional gospel with soulful harmonies, Urban Voices Collective, combine their rich vocals with a striking visual image.

The distinctive style and outstanding vocals of this London based collective have granted them countless performances with artists as diverse as Take That, George Michael, Muse, Tim Rice, The Who and The Kaiser Chiefs.

Whether backing some of the world’s biggest artists, headlining at a renowned venue in their hometown or performing at an intimate wedding, Urban Voices Collective promise to deliver a night to remember with their infectious energy and outstanding performance.

Founded by Karl Willett in 2006, the collective is made up of singers from a variety of musical backgrounds, bringing together some of the strongest and most adaptable vocal talent in London. With extensive experience in both live and studio settings, Urban Voices Collective’s credits include collaborations with the London Symphony Orchestra, recording with acclaimed producer and composer David Arnold, backing vocals for Paloma Faith’s album ‘Fall To Grace’ and their own gospel arrangement of the national anthem for the Queen and the Royal Family at the closing ceremony of the Olympic Games 2012. Other projects include recording with Coldplay for the 2012 Paralympic Games and a personal invite to perform for Boris Johnson at the Mayor’s Christmas Carol Concert.

Urban Voices Collective have had first hand experience performing at workshops and seminars all over the world, teaching groups of non vocalists the art of harmonies and performance on group away days.

I would like to let you know how great UVC were on Saturday. It was an absolute pleasure to work with them from start to finish. Their performance was stunning and emotional. Angela Carey , Executive Officer, Sandhurst Town Council

‘There is a saying concerning music: if it comes from the heart, it goes to the heart, Urban Voices Collective go straight to the heart. It’s a constant joy to work with them, they sound like I dream a choir should sound.’ David Arnold, Grammy Award Winning Composer & Producer
‘Urban Voices Collective are my choir of choice! A room full of individuals making a beautiful sound together. They are the voices of angels.’ Paloma Faith
‘Apart from sounding amazing, they are a very professional and hard working choir. They always take everything in their stride.’
Kim Gavin, Creative Director, London Olypmics Closing Ceremony 2012
‘Urban Voices Collective are a wonderful combination of enthusiasm, originality and talent.’ Sir Tim Rice
‘Urban Voices Collective always exceed my expectations. They give you beautiful harmonies with a modern and truly original twist. From the way they look, to the way they sound, UVC really are the best, but most importantly they are amazing people to work with.’ Ashley Banjo, Diversity
‘A massive thank you UVC. You were all so lovely and I really enjoyed working with your team. Having all the delegates on their feet at the end was fantastic and with a tear in their eyes, this was our aim and we did it… Thank You!! We look forward to working with you again in the future’. Abby Fox, Powerhouse Productions
‘Not only are they a choir with incredible voices, but their character, passion and enthusiasm is as infectious as it is inspiring and makes them a choir quite like no other. A joy to listen to, a joy to watch and a joy to work with. The world is a better place with UVC in it.’ Marc Robinson, Universal Music MD of Globe Creative & Commercial.
‘Urban Voices Collective should be available on the NHS immediately.’ Peter Quinn, The Arts Desk
‘Urban Voices Collective singing The Beatles’ ‘Because’ was one of the great examples of harmonising in pop.’ The Times