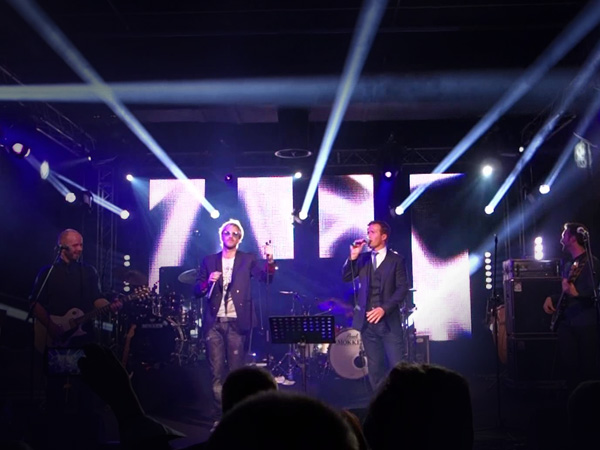 The RPJ Band has one goal in mind, to simply be the most energetic, crowd pleasing, foot stomping, hands in the air, incredible, never to be forgotten, best event band in the world!

They strive to exceed expectations at every turn, and one thing is for sure they will leave your crowd breathless, smiling and crying out for more. With their incredible musicianship, utterly brilliant crowd interaction, and the sheer euphoric force they bring to any event is something truly not to be missed.

Rick was born in Chertsey, Surrey, straight into a world of music and Rock ‘n’ Roll high society. Unsurprisingly, with his father being the late Rick Parfitt Snr of Status Quo, Rick was surrounded by music from a young age and both his parents keenly encouraged him to develop his musical ability. A fantastic schooling provided a brilliant creative environment for Rick to hone his talents alongside other children from famous families.

In 1996, Rick began his music career when he began song writing for a number of artists within the industry, as well as performing at the Kitsch Lounge Riot at The Pigalle Club, where after just two months he found himself headlining.

Coupled with performing, Rick established a successful career in Karting, winning numerous championships including Le Mans and Dubai 24 hour races as well as racing against some of the great names in motor sport including Lewis Hamilton, Jenson Button and David Coulthard.

In 2007, Rick decided to concentrate solely on music and formed The RPJ Band. To date, they are the most successful events band in the UK and are a dynamic force within the industry, winning accolades from press and celebrity supporters nationally and internationally.

Alongside The RPJ Band, Rick currently races for Ginetta, holds regular DJ residencies at some of the hottest clubs in London and is currently in the studio song writing for his new creative project.

Away from music and racing, Rick is passionately involved with his own charity, The RPJ Crohns Foundation, which raises awareness of Crohn’s Disease – an illness which Rick has suffered from since the age of nine – and has helped raise significant funds for research.