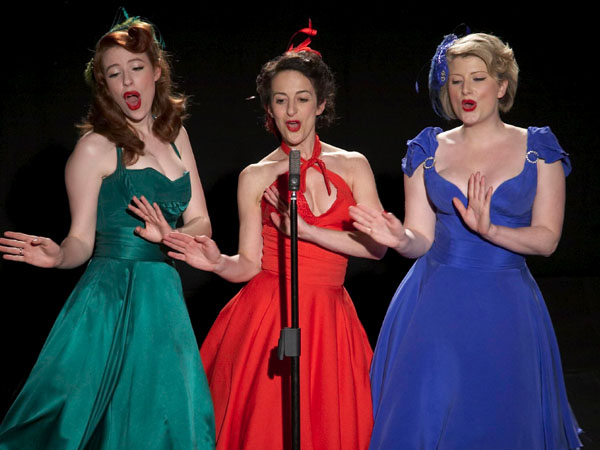 Three bewitching females dressed in delightfully matching attire, singing in close harmony and moving in impeccably synchronized steps? Just like the Andrews Sisters, who took the genre to the top, the Puppini Sisters have long become synonym with the intoxicating mix of music and style they call Swing-Pop, and have won hearts all over the world!

This fabulous 1940s flavoured trio’s dark renditions of swing tunes and pop classics make them an irresistible show with a constantly expanding repertoire. Their original takes on post-punk classics like the Smiths’ Panic and Blondie’s Heart of Glass took London audiences by storm.

Back in 2004, when Marcella Puppini created a new Sisters group with Kate Mullins and original member Rosanna Schura (later replaced by Stephanie O’Brien), the idea was not to try and copy the enchantments of a historical songbook: rather to create an individual sound, which would encapsulate the trio’s eclectic influences.

The three met in the same Music College, but their résumés were very different: Kate (the blonde) had sung in the heavy metal band Killed In Action; Marcella (the brunette) had recorded the dance hitRevolution after serving time in a punk group; as for Rosanna, and later Stephanie, they both came from a classical background.

Marcella had had a career in fashion (she had graduated from Central St Martins College of Art and worked with Vivienne Westwood before embarking on a Music degree), so the trio’s first appearances were (almost naturally) à la mode. But their gigs quickly became a unique rendezvous for a mix of impassioned fans: jazz-goers, retro-aesthetes, people into nostalgia, others with a style obsession, and also kids, spellbound by the vivacity and colour which sparkled in the Sisters’ voices…

Every style was filtered through their rigorous, sunny, vocal discipline: no improvisation, just the extraordinary power of a wall of voices whose architecture seemed designed by a virtuoso. In their first two albums, Betcha Bottom Dollar and The Rise and Fall of Ruby Woo, they combined their own arrangements of classics from the Thirties to the Fifties, jazzy reinventions of rock hits, and self-penned original songs. And then they sang for Santa Claus in Christmas with the Puppini Sisters, before tackling the Garden of Eden of vocal standards, i.e. old-school Hollywood, and being invited to duet with Michael Bublè on his Christmas album.

In the eight years since their inception, the Puppini Sisters have received accolades from fans as disparate as Prince Charles and Cyndi Lauper, have been awarded Gold and Multi-Platinum discs, have performed on iconic stages all over the world (most recently at l’Olympia in Paris and The Shepherd’s Bush Empire for a second sell out show there), and have collaborated with “banging” Electro-Swing groups as well as traditional orchestras.

And now they have just undergone another change with the arrival of new Sister Terrianne Passingham, who replaced Stephanie O’ Brien in July 2012.

Terrianne is a gutsy, flame-haired beauty from Yorkshire who plays the flute and saxophone and combines a love of old-school swing with a goth/punk background – all of which makes her the perfect fit for the multi-faceted trio.

I’m living in a dream world – says Terrianne of her new status as a Sister. It’s the ultimate fantasy.

And with a change of line up comes a new direction in music, which sees the Sisters exploring their passion for mixing the old with the new, the swing with the “bang”, as they write for a new album.

We’ve been thinking about it for years,” they confess (in close harmony). We love “antiquing” rock and pop songs with our arrangements, but we also really love writing in a style that combines swing and pop in a more modern sense – says Marcella.

“We’ve come so far with our music, this new era is really exciting – says Kate. I relish the prospect of taking it to corners so far unreached.