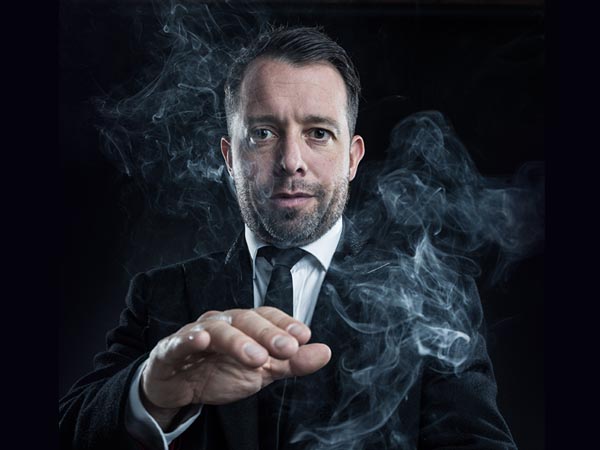 Have you ever had you mind-blown? Really?

So, Is it really magic or is it deception? Whatever you decide these eye popping illusions & cunning ruses are designed for a modern discerning audience! Bulletproofed & audience tested! The Decpeptionist® will engage, astound & amaze even create bespoke illusions.

Entirely self-contained armed only with his ‘bag-of-tricks’ & guile. Important clients marvel as he unleashes his pop-up show delivering a barrage of incredible miracles causing jaws to drop all night long!

Hired by those ‘in-the-know’, The Deceptionist is regularly entertaining valuable and VIP clients in hospitality greenrooms, performing as an icebreaker, table magician or a marvellous dinner party guest.

Performing for some of the globes biggest names private tables; Muhammad Ali, Keira Knightley, Steve Wynn, Sir Terance Conran, Red Hot Chilli Peppers, Kings of Leon and Michael Schumacher are just a few of the stars that have witnessed Sav‘s brand of deception. He has baffled DJ Chris Moyles many times on his radio show and to boot he’s beguiled a real life King and Queen in their residence!

Bespoke effects are dreamed up and visualised. Notably his best trick was to make $1,000,000 appear ‘like magic’ out of thin air. Made 2 giant Globots materialise for Area51 on #BGT stage to literally blow Simon Cowell mind. Made a ‘one-off’ Ducati ‘pop -up’ out of nowhere for it to be given away. Taught a Billionaire businessman how to make coins appear and then vanish at his fingertips. He also starred in ITVs ‘Astounding Celebrities’ and has made many other TV appearances.

The Kings of Leon