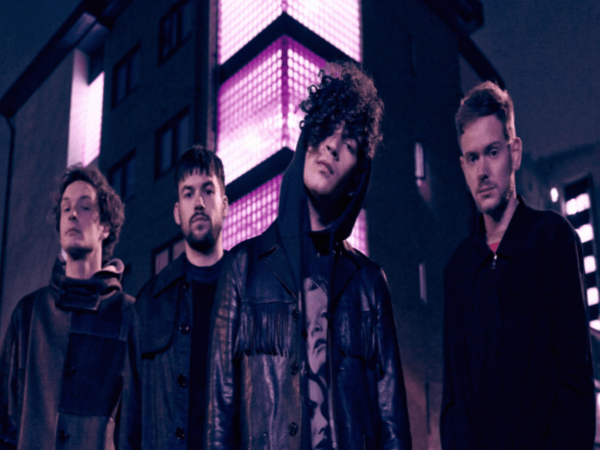 Britain’s the 1975 are a sophisticated pop outfit who mix swaggering, ’80s-style dance rock and new wave angularity with darkly poetic alt-rock lyricism. Centered on lead singer/guitarist Matt Healy, the 1975 also features guitarist Adam Hann, bassist Ross MacDonald, and drummer George Daniel. Influenced by a range of artists, from Michael Jackson, the Rolling Stones, and U2 to the soundscapes of Brian Eno, Boards of Canada, and Sigur Rós, they often contrast their pop-influenced hooks and kinetic guitar melodies with lushly ambient backdrops. Although they built a loyal following with their extroverted live performances, it was after their track “Sex” was featured by DJ Zane Lowe on his BBC1 radio program that they came to wider public attention.

Originally, the members of the 1975 met in 2002 while attending high school in Wilmslow, Cheshire, a suburb of Manchester. They started out covering punk songs and playing at local all-ages shows before developing their own sound. In 2012, they released their first EP, Facedown, on U.K. indie label Dirty Hit, and soon after supported Little Comets on their nationwide tour. The lead track from the debut EP, “The City,” was played on Huw Stephens’ BBC Radio 1 show, and the quartet’s energetic live performances endeared them to crowds, while their music began to sweep across music blogs. Toward the end of 2012 they released the Sex EP, and the title track was played by influential BBC Radio 1 DJ Zane Lowe.

In 2013, a third EP appeared, spawning the U.K. Top 20 single “Chocolate.” The band’s popularity continued to rise and they went on to play shows across the U.K., and were also invited to play at industry showcase SXSW in conjunction with a U.S. tour. That same year, they delivered their eponymous debut, The 1975, recorded with producer Mike Crossey (Arctic Monkeys, Foals). Featured on the album were several previously released tracks including “Chocolate” and “Sex,” as well as the singles “Settle Down” and “Girls,” the latter of which peaked at number 12 on the U.S. Billboard Hot Rock Songs chart. A number one album in the U.K., The 1975 helped build the band’s reputation in the States, where it reached number 28 on the Billboard 200.

The 1975 returned in 2016 with their sophomore full-length album, the Crossey-produced I Like It When You Sleep, for You Are So Beautiful Yet So Unaware of It. Featuring the singles “Love Me” and “The Sound,” it found the band moving toward a more ’80s adult contemporary pop- and R&B-influenced sound. To promote the album, the band toured the U.K., Europe, and North America, and made a high-profile appearance on Saturday Night Live. The album debuted at number one in the U.K. and U.S. and was shortlisted for the esteemed Mercury Prize. In February 2017, the band released a cover of Sade’s “By Your Side” to benefit the U.K. charity group War Child.