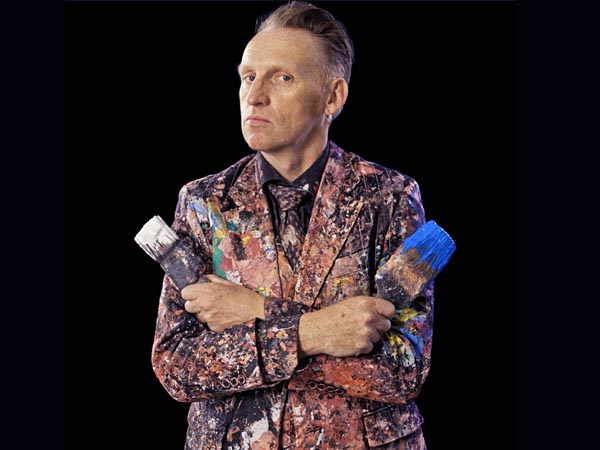 Jon is a fantastic painter who provides large-scale pieces of art work as big as 8′ x 6′. He can provide short dynamic pieces and has a variety of stock images available ranging from city skylines to celebrity portraits and he is always mesmerising to watch in action.

Speed painting is a definite art and Jon delivers his all to a kicking soundtrack and most often upside down on a revolving easel. Let your guests get enraptured as the picture appears before them, whether that’s a stock image of an icon, a skyline or even a custom, commissioned piece.

An incredibly talented artist, Jon’s unique fast painting and his ‘painting beyond numbers’ act is performed with stylish aplomb by a true variety master.

Jon has travelled the world, appeared on numerous TV shows, toured with Miss behave in the Crack, and Slightly Fat Features, played the Royal Albert Hall, appeared in London’s glittering West End and in cabarets too numerous to mention.

Jon has a repertoire of portraits, which he performs in 3-8 minutes, or he can produce commission’s specific to an event.

Recently Jon has been commissioned to paint portraits (while they are in the audience) of Ronnie Wood, Paul O’Grady, Robert Martinez and David Bailey.

Jon’s portraits have also reached thousands at charity auctions and can make the ideal item and show piece all in one.

Ideally he works on a small platform but could perform on the dance floor. Paintings can also be taken home at the end of the event if they wish as a simple rolled up canvas.