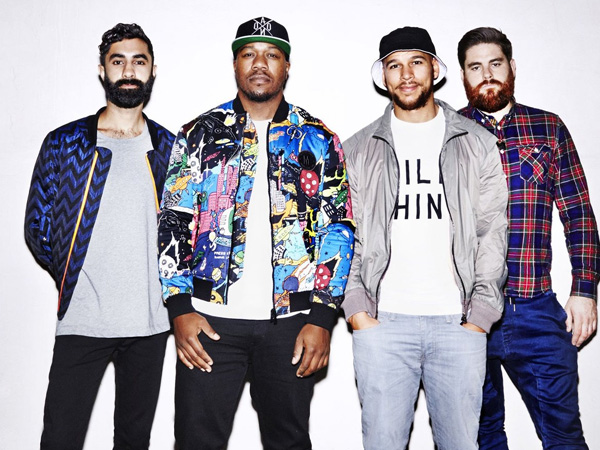 London-based electronic outfit Rudimental appeared on the scene, seemingly from nowhere in 2012 with their UK number one single, “Feel the Love”.

In 2013 they released their hit Album, Home working with some of the UK’s finest Talent including Emeli Sandé. Their album was met with rave reviews for their unique mix of dubstep, R&B, house and Drum’n’bass, going straight to number one in the UK Album Chart.

A band whose energy is infectious, Rudimental is available for both DJ sets or with a full live band and singer. The perfect dance band to get an audience up and on their feet!

They were nominated for a Mercury Prize in 2013, and won several awards including the Brit Award, and the MOBO Award for Best Album.[2] Rudimental also received nominations at the MTV Europe Music Awards for Best New Act, and Best UK and Ireland act.[3] Rudimental has achieved multiple Platinum awards for record sales in several countries[4] including in the United Kingdom and Australia.

The group rose to prominence in 2012 when their single “Feel the Love”, featuring singer John Newman, topped the UK Singles Chart, and for which they were also nominated for a BRIT Award in 2013. “Feel the Love” was also used for the opening credits of the 2013 documentary movie Spark: A Burning Man Story.

The group have released further singles, including “Not Giving In”, featuring Newman and Alex Clare, “Waiting All Night”, featuring Ella Eyre which also topped the chart in the UK, “Right Here”, featuring Foxes, “Free”, featuring Emeli Sandé, and “Powerless”, featuring Becky Hill. Rudimental were named by the BBC as the festival band of the summer. In 2013, Rudimental’s debut studio album Home debuted at number one in the UK Albums Chart and was also nominated for a Mercury Music Prize.