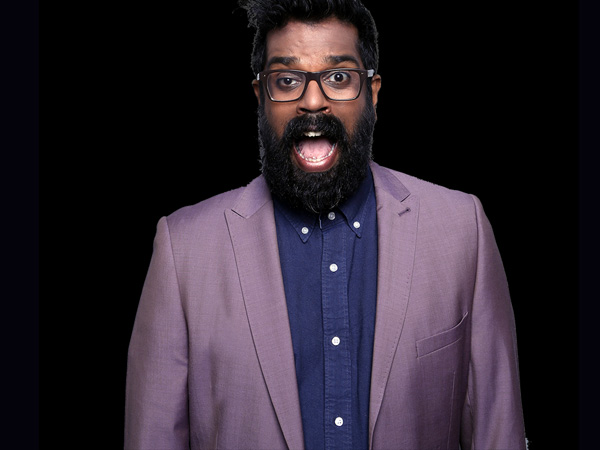 Skyrocketing to fame, Romesh Ranganathan has become a household name, not only through his own stand up, but shows like ‘The Misadvenutres Of Romesh Ranganathan’, Sky 1 commissioning a six-part series of ‘Rob & Romesh Meet’, becoming the new regular on ‘A League Of Their Own’, taking on a new role for Dave in ‘Judge Romesh’ as well as writing and starring in his own Sky 1 sitcom ‘The Reluctant Landlord’.

Former maths teacher Romesh made his debut on the comedy circuit in 2010 and has quickly made a name for himself. His critically acclaimed Edinburgh Festival show, ‘Rom Wasn’t Built In A Day’ being nominated for the prestigious Edinburgh Fosters Best Show Award in August 2014. This was only 12 months after his festival debut ‘Rom Com’ being nominated for the coveted ‘Best Newcomer Award 2013’.

These achievements culminated in his debut appearance on BBC2’s ‘Mock The Week’, BBC1’s ‘Live At The Apollo’, ITV1’s ‘Sunday Night At The Palladium’, BBC3’s ‘Russell Howard’s Good News’, ‘Edinburgh Comedy Fest Live 2013’, a regular slot on Channel 4’s weekly topical show ‘Stand Up For The Week’, hosting two series of BBC Radio 4 Extra’s ‘Newsjack’ as well as appearances on BBC Radio 4’s ‘News Quiz’ and the long-running and beloved ‘The Now Show’.

From playing comedy clubs all over the country Ranganathan’s profile has grown as has the respect from his peers which has resulted in him writing for numerous shows and supporting the likes of Seann Walsh, Bill Burr, Paul Chowdhry and one of his comedy heroes Ricky Gervais.

Romesh has also been seen acting in several hit sitcoms including Jo Brand’s ‘Damned’ for Sky Playhouse with a few more parts in the pipeline to be filmed in the coming months.

His 2015 BBC TV series, Asian Provocateur, in which Ranganathan travelled to Sri Lanka to explore his ancestral heritage has just been re-commissioned, and currently sees Ranganathan nominated for a BAFTA for Best Entertainment Performance.

“the best yet… efficient, irresistible comedy”

“… his ability to produce bitingly fresh gags marks him out from the crowd.” The Guardian

“Ranganathan’s punchlines are sharper and funnier than many of his peers.” The Guardian