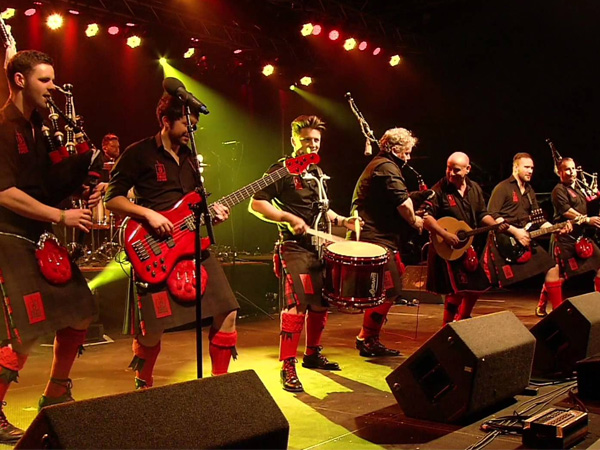 It’s spicy, fast, loud and they’re wearing kilts what’s not to like.

Bagpipes with Attitude, Drums with a Scottish accent, a blazing rock band and a show so hot it should carry its own health warning!
Taking their signature ‘Bagrock’ sound to the masses, The Chilli’s have fast become a global phenomenon, rocking far-flung shores from Melbourne to Milwaukee and everywhere in between.

The Red Hot Chilli Pipers sound is a fusion of traditional pipe tunes and contemporary anthems – tracks from across their four albums include the likes of ‘Clocks’ by Coldplay, ‘Chasing Cars’ by Snow Patrol, ‘Let Me Entertain You’ by Robbie Williams, Queen’s ‘We Will Rock You’, a rock medley of Deep Purple’s ‘Smoke On The Water’ and AC/DC’s and ‘Thunderstruck’; most importantly this is all done in the Chilli style of course!

With three albums already under their belts, the band’s most recent release ‘Music for the Kilted Generation’ took Bagrock up another gear in 2010. With clever covers of ‘Long Way to the Top’ by AC/DC, ‘Baba O’Reily’ by The Who and a great version of ‘Lowrider’ by War- just a few examples of how well rock tunes fit on the bagpipes! Previous live album and DVD ‘BLAST Live!’ (REL Records, 2009) has already gone triple platinum in Scotland plus second album ‘Bagrock To The Masses’ (REL Records, 2008) has just achieved gold status in the UK.

Further trips to the USA, Saudi Arabia and the UAE saw the band cement their reputation as one of the most exciting live acts around!