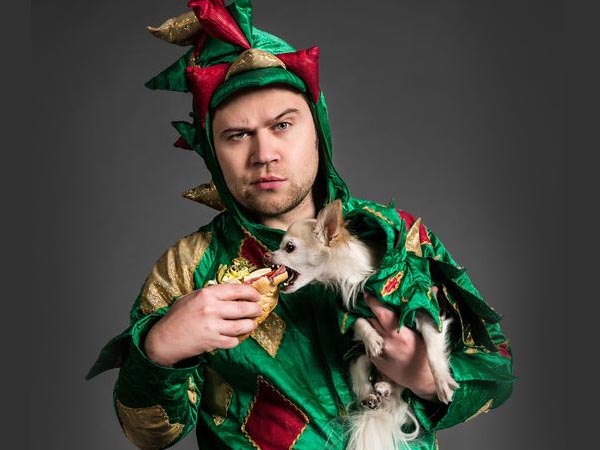 The stand out star of Penn & Teller: Fool Us & America’s got Talent Season 10, Piff the Magic Dragon is a wonderfully unique magic act mixed with dry comedy which is not only performed by a ‘real life’ Dragon but one with The World’s First Magic Performing Chihuahua by his side.

With over 40 million YouTube hits to his name, Piff has performed to hundreds of thousands of people all over the world in venues such as Radio City Music Hall, The O2, London, and Sydney Opera House. His sidekick Mr Piffles meanwhile has been levitated, laminated, shackled in a straitjacket and shot out of a cannon all in the name of entertainment.

They don’t do children’s parties.

Imagine Larry David in a dragon suit whilst performing jaw-dropping magic tricks and you’re on the right track.

Piff’s solo show has had five record breaking runs at the Edinburgh Fringe and two sell-out seasons at Soho Theatre in London’s West End, a national tour of the UK and Australia.

He was the opening act for Mumford & Sons on their 17 date UK tour and has just completed a six month residency at the Cosmopolitan of Las Vegas in their flagship show Vegas Nocturne.

Piff has also been seen on America’s Got Talent and on the hit magic show, Penn and Teller, Fool Us.

“Funny doesn’t even begin to describe the half of it. It’s a nonstop hour of pure, delirious fun mixing comedy with magic and scoring 10 out of 10 for both.”