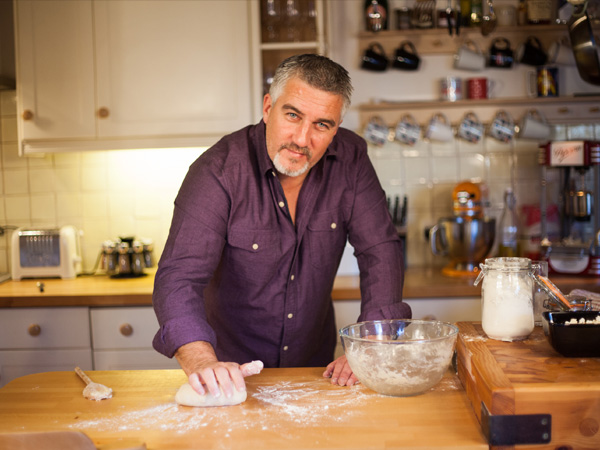 Paul loves hosting live baking demonstrations and award ceremonies. He’s been a judge on The Great British Bake Off from the very beginning, with the most recent series ending on a high of 15.6 million viewers following the show’s move to BBC1. He began his media career on Carlton Food Network and Taste in 2002 where he co-presented two TV series with James Martin.

In 2014 Paul undertook his first live tour, Paul Hollywood – Get Your Bake On! which saw him hosting an evening of live baking, comedy and fun at theatres across the country.

He has also judged Junior Bake Off and celebrity versions for Sport Relief and Comic Relief all alongside Mary Berry.  The show is now seen in more than 18 countries around the World including the US and Australia.  In May 2013 he appeared as judge on the new US version of Bake Off, The American Baking Competition which aired on CBS. His series Paul Hollywood’s Bread aired in the UK on BBC2 in March 2013 and in Autumn 2013 Paul’s new show, Pies & Puds, launched on BBC Daytime running at teatime for 20 episodes and was repeated on Saturdays and Sundays. In 2016, his new show, City Bakes aired on the Food Network.

In 2005 he authored a best-selling book ‘100 Great Breads’ which has been published in ten countries and seven languages, and was voted ‘top bread and pastry book’ by the Gourmand Academy. His second book How to Bake, published by Bloomsbury, came out in summer 2012 and quickly went on to the top of the bestseller lists. The book to accompany his Bread series came out in February 2013 with the Pies and Puds book hitting shelves in October 2013 to coincide with the programme of the same name. Paul Hollywood’s British Baking came out in October 2014 and Weekend Baker launched in 2016.

Paul makes regular contributions to The Telegraph, The BBC Good Food Magazine, Olive Magazine, Waitrose Magazine and has written for both The Observer and The Daily Mail.