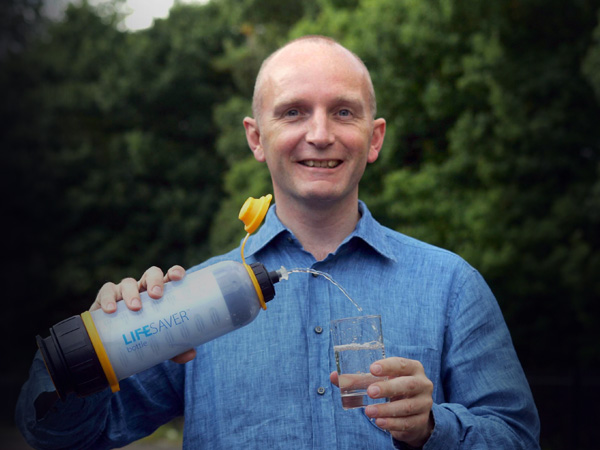 In his keynotes Michael explains the value for companies to be socially responsible and embrace honest and ethical standards that will actually increase the bottom line.

He talks about the moral and ethical factors that led him to invent the LIFESAVER water bottle. The speech includes a demonstration of the LIFESAVER system, illustrating how people in areas without clean drinking water can finally have access to this basic necessity of human life.

LIFESAVER is – a robust, portable water filter made for all types of explorers, the military and for humanitarian aid.

The technology answers a global need for clean drinking water, both for families and communities living without access to clean water and for in-the-field aid workers to use whilst operating in scare clean water areas. LIFESAVER® works directly with NGO’s, charities and governments who deploy LIFESAVER® products through their emergency response efforts and planned programmes.

During the twin tragedies of the Asian tsunami and Hurricane Katrina, Ipswich water-treatment expert Michael Pritchard winced helplessly at televised coverage of throngs of refugees waiting for days for a simple drink of clean water; stricken by the chronic failure of aid agencies to surmount this basic challenge, Michael decided to do something about it.

Using a non-chemical nano-filtration hollow fiber membrane with 15 nanometer pores (it is designed to block viruses), the Lifesaver bottle can make the most revolting swamp water drinkable in seconds. Better still, a single long-lasting filter can clean 6,000 liters of water. Given the astronomical cost of shipping water to disaster areas, Pritchard’s Lifesaver bottle could turn traditional aid models on their heads.

Born in Epsom, Surrey in 1967, Michael was educated at Gordonstoun School in Scotland and progressed to the University of Redlands in California, USA where he studied Business Administration and Political Science. At the age of 18 he competed at international level winning a gold medal for England in the 4 x 100m relay.

Michael’s career began in the computer industry selling Apple computers, after which he moved to Wace Group PLC in London as Business Development Director before co-founding Zagme.com a mobile ‘location based’ marketing company in 1998. In 2000 Michael started a property development company shortly followed by a risk assessment business in 2002. In 2006 Michael invented LIFESAVER with the first commercially available products going on sale in September 2007. Michael holds over 100 patents covering several fields including drinking water, aerosols and oil exploration.

Michael has been a proud patron of the international aid exhibition Aidex for 3 years and has spoken and lectured at a number of international events including TED Global, MIT, iFest and PWC’s Diamond exchange.