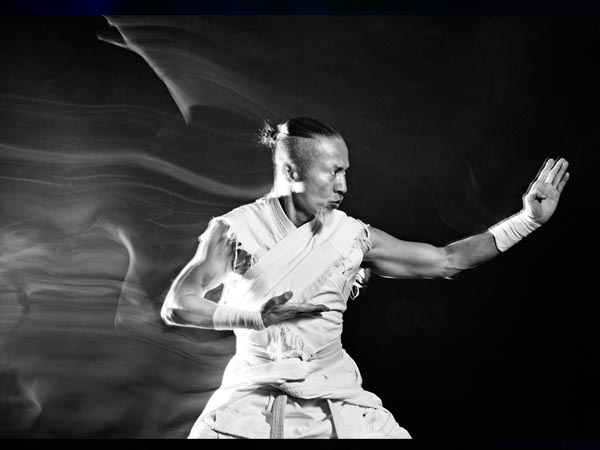 The rhythm of Karate and Kabuki is combined with street dance (Locking, Punking, Waacking), to create an original dance style.

Since 1991, the company have performed their breath-taking projection dance show to audiences around the world.  Their interactive video mapping project mixes real-time figure tracking with projection bringing the WOW factor to your event.

Katsumi has developed an original dance style as composite art to showcase the unique elements of traditional Japan – “movement, rhythm and spirit”.

Having first learned Karate from his father at the age of five and from training with Karate experts at the age of 10 Katsumi he then moved on to Boxing while studying in university.

Taking up Hip-Hop dancing in his early twenties he copied American Hip-Hop dancers. He was inspired by a simple question asked by a famous American choreographer – “Why do you copy foreign styles while there are so many cool elements in Japanese art and culture?”. Since then he has devoted himself to pursuing the concept of cool Japan.

After years of trial and error, he created an original dance style based on the movements and rhythm of Japanese traditional dance. He also invented “Street Nunchaku” by combining dance moves and Nunchaku, which is an art of self-defence he learned alongside Karate. He then developed a new performance style “Projection Live” by synchronizing live dance and projected images. He first presented this new performance at JAPAN EXPO 2004 in L.A.

Katsumi’s new performance style “Projection Live” is highly praised around the world. He has performed in 38 countries by invitation and been on TV in 15 countries. He also holds lectures on “Cool Japan worth sharing with the world” in and outside Japan (including Moscow State University, Aoyama University, Obirin University, Nagoya Gakuin University and London SOAS university).

In 2015, Katsumi performed at the opening ceremony for the 128th General Assembly of the International Olympic Committee in Kuala Lumpur.

He is also known as a talented designer, who designs and crafts his own clothes, costumes and accessories for both stage and private use.