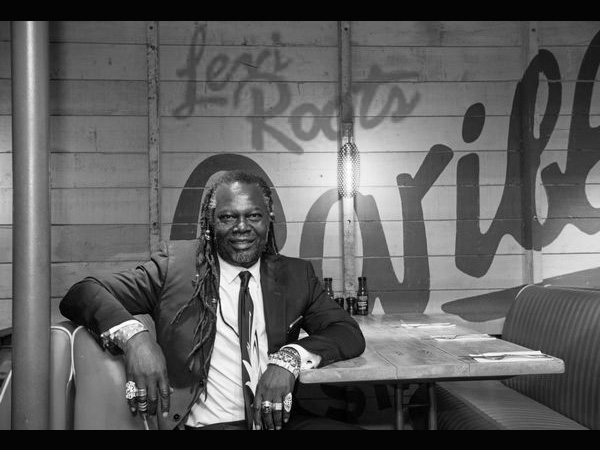 Levi is the Reggae Reggae Sauce entrepreneur, whose famed appearance on Dragons Den and subsequent investment saw the rapid popularity of his sauce and the expansion of the brand to include a range of sauces, cookery books, and more recently entrepreneurial books.

As a presenter, awards host and motivational speaker he encourages fellow business entrepreneurs to follow in his footsteps. Focussing not only the Reggae Reggae brand, but the message it symbolizes.  As he says, ‘I want to spread the word that if a black Brixtonian Rastafarian can make it with just a sauce, then you can make it too.’

With seemingly endless possibilities for the popular Levi Roots brand, Levi continues to bring the sunshine of the Caribbean to all of his ventures while popularizing the spicy flavours of his Jamaican heritage….Always focused and ever motivated Levi Roots remains true to his inspired mantra of success, ‘Put some music in your food!’

Along the way, Levi has managed to pack in a great deal! In 2013, he launched his School of Life Tour, taking his message to children all over the country, inspiring them to follow their dreams and showing them how to make tasty, healthy food. He has published six cookbooks and a business book, released a new album and most recently, Levi realised his ultimate dream of opening a Caribbean restaurant. In December 2015, the Levi Roots Caribbean Smokehouse opened its doors to the public in Westfield Stratford City, bringing authentic sights, sounds and tastes of the Caribbean to the masses.

A Jamaican reggae musician, chef, and entrepreneur, he has performed with James Brown and Maxi Priest and was nominated for a MOBO award in 1998. He was a friend of Bob Marley when he resided in the UK and performed “Happy Birthday Mr. President” for Nelson Mandela in 1992 on his trip to Brixton. Levi gained widespread fame after appearing on the UK television programme Dragons’ Den looking for funding for his “Reggae Reggae Sauce”.

Reggae Reggae Sauce is a jerk barbecue sauce made to his grandmother’s “secret recipe”. Levi and his five children began marketing the sauce at the annual Notting Hill Carnival in 1991. In 2006, the sauce sold 4,000 bottles at the carnival.

Whilst promoting the sauce at a food trade show, he was spotted by a BBC producer who approached him to appear on Dragons’ Den. He appeared in the first episode of the fourth series, and offered a 20% stake of his business in return for £50,000. Despite erroneously claiming that he had an order for 2.5 million litres of the sauce (when in fact the order was for 2,500 kilograms), he was offered the £50,000 for a 40% stake in his business by Peter Jones and Richard Farleigh (Farleigh later said that he was impressed by how Levi was able to recompose himself when he discovered the error in his pitch).

Shortly after his appearance on the programme, Sainsbury’s announced that they would be stocking the sauce in their stores and that was just the beginning……