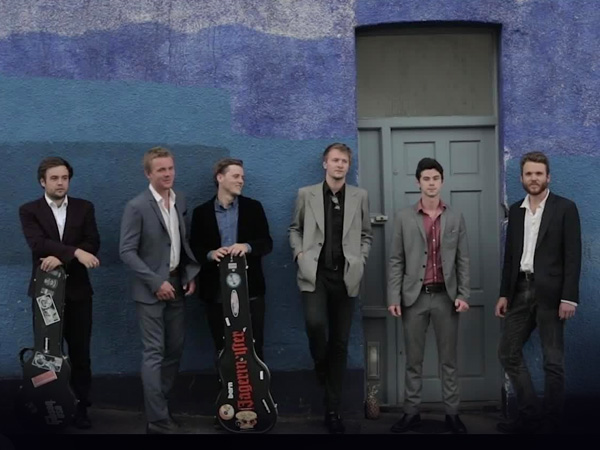 John Bull & The Bandits are a multi-layered five piece Rock & Roll band influenced by several similar genres such as, blues, folk country & soul. Founded by Brothers Sam (lead vocals / guitar) and Tom Bull (backing vocals / saxophone), the band’s reputation as an exciting live act has grown massively due to their commitment to song writing excellence and a high level of musicianship.

With a superb rhythm section in place, the band has earned a succession of high profile support slots with artists such as Ronnie Wood, Booker T, James Hunter, Dr. John, Little Feat, and Candy Staton. John Bull and The Bandits are now primed for the upcoming year and are ready to deliver their unique brand of hook laden, high-quality, honest Rock & Roll to the world.

John Bull was born out of the collective imagination of Brothers Tom and Sam Bull. The Brothers grew up together on the south coast, picking guitars and listening to their early heroes Woody and Johnny. It was during these early years that the John Bull sound was born.

Over time and places John Bull began to collect his Bandits and it was as ‘John Bull and the Bandits’ that they began to play venues such as the Fiddlers Elbow, the Half Moon, the Proud Galleries, the Spice of Life, Madam Jojo’s, and the Crypt.

They then went on to perform at a multitude of high profile venues (Hammersmith Apollo, Albert Hall, The Notting Hill Arts Club, Ronnie Scot’s) and festivals (Glastonbury, The London Blues Fest), where they developed a fully formed, fully engaging live set.

Never losing site of their commitment to excellent song writing, the band spent a large portion of 2015 in Nashville, working with some of the best writers and musicians in music city. With an emphasis on lyrics, storytelling and honesty, the band wrote some of their most exciting, engaging songs to date, which were recorded as demos in early 2016.

And so John Bull and The Bandits continue to launch their assault on the London scene robbing from the musically rich to create shockingly contemporary Blues and Old Time Rock n’ Roll for which the young, beautiful, and damned are turning out in their droves to hear.