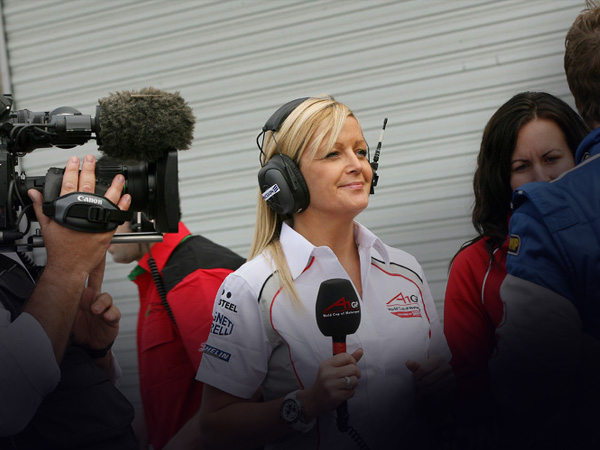 Diana Binks is an energetic and professional reporter, producer and presenter. With her versatile expertise, there is never a job too big or too small for Diana in the adrenaline-packed sport world. She has been the face of late night sport on Five, ITV, Sky Sports and MotorsTV, presenting programmes such as the Red Bull Air Race, British Formula 3, the GT Championship, the British Touring Car Championship and the British Superbike Championship.

Diana has also presented on Speed TV in the USA and MotorsTV in Europe. Diana’s multitude of transferable skills has meant that she can, and has, worked at many corporate events engaging her audience and going above and beyond for clients.

Best known for being a motorsport pit lane reporter, it is in this arena that Diana pinpoints the best achievement of her career; clocking up 100 interviews during a 22 hour live stint on air at the infamous Le Mans 24 hour race. Another highlight was covering the Red Bull Air Race, which meant keeping track of the action both on the ground and in the air! She has never been afraid to rise to a challenge, figuratively and literally.

With her versatile expertise there is never a job too big or too small in the adrenaline-packed world of television and sports. In the UK alone, she has been the face of Late Night Sport on Five, and on ITV, Sky Sports and Motors TV, she has covered an array or different motorsports, including the British Formula 3 and GT Championship, the British Touring Car Championship and the British Superbike Championship. She has also presented on global networks including Speed TV in the USA and Motors TV in Europe.

Also adept at the behind-the-scenes jobs too, Diana worked as a press officer for the BAR Formula One Team, which gave her experience in the world’s most glamorous fast lane. From her experience and wisdom of working in F1, she then secured the role of host of Sky Sports ‘So you want to be an F1 Driver?’

Diana’s multitude of transferable skills has meant that she can, and has, worked in many sectors of the media industry and her experience has by no means been limited to motorsport. She was invited to take part in a pilot for the BBC’s Mid-week National Lottery Show. She has also been a guest presenter on Radio 5 Live’s 606 show, and to top it all off has worked with BBC Leeds and Newcastle as a reporter on their Inside Out’ programme.