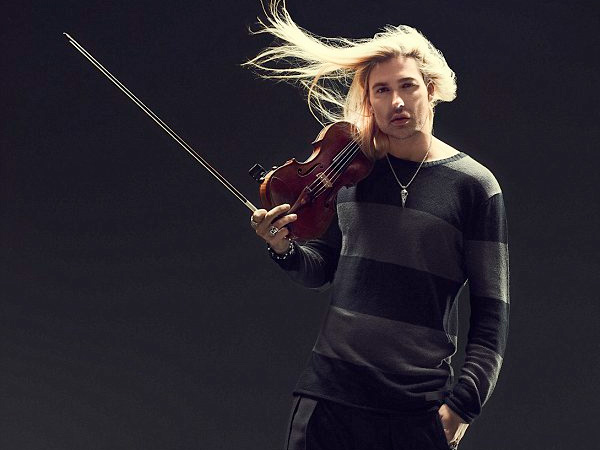 Part maverick, part genius, total virtuoso, David has been surprising people since he was four years old – when he was first handed a violin and began playing. Within four years David was already one of the foremost classical violinists in the world.

In 2007 David made his appearance in Germany with the release of his crossover album Virtuoso and he has been redefining standards in the classic and crossover scene step by step ever since. With a matchless career performing with legendary orchestras and conductors David has released both classical and crossover albums. His most recent album ‘Explosive’ is a red hot combination of virtuosic playing with electronic beats. Providing incredible entertainment, David can perform in both smaller, more intimate settings and at large events with orchestra.

Born in the town of Aachen, David received his first violin at the age of four and had already given his first performance together with the Hamburg Philharmonic State Orchestra, at the age of ten. At thirteen, he became the youngest artist to sign an exclusive contract with the Deutsche Grammophon. However, in 1999, at the peak of his career, this aspiring artist paused and decided to stray from his laid out path as a classical violinist and move to New York – not to take a break but to perfect his technique and build a theoretic foundation upon which to build his musical skills: He registered at the Julliard School, majoring in Musicology and Composition and studies with Itzhak Perlman and his education lent completely new angles to his performance.

David’s special passion for composing is literally distinguished in 2003, winning the Julliard composition competition with his work – a fugue in the style of Johann Sebastian Bach. His composition professor, Eric Ewazen, described David: “We were completely overwhelmed by the intensity of his spectacular and expressive playing.”

On completion of his studies, David has had a clearly defined goal in sight, wanting to lead young people to classical music and awaken enthusiasm for supposedly “serious” music. For him, the merging of classical music and elements from pop, rock and rhythm and blues is a means to this end.

Since the fall of 2007 and the release of his first crossover CD, “Virtuoso”, the violin star has been fulfilling his aims, redefining both the classical and crossover scene. His CDs were Bestsellers of the Year in Germany for three consecutive years (2010 with “Classic Romance”/ Mendelssohn Violin Concerto, 2011 and 2012 with “Legacy”/ Beethoven Violin Concerto). And David made his acting debut and fulfilled a dream by playing the main role of Niccolò Paganini in “The Devil’s Violinist– Der Teufelsgeiger” (Director: Bernard Rose), appearing in movie theatres in 2013. Together with Franck van der Heijden, Garrett also composed the music for the film, dedicating his aria, “Ma Dove Sei”, to the star tenor, Andrea Bocelli.

David has captivated listeners of all ages as he seeks to make classical music less daunting. Since 2007, David has achieved the balance between popular and serious music; a differentiation the successful violinist himself doesn’t make. Like Leonard Bernstein and many others, he is convinced that there is only good or bad music – regardless of genre. This becomes obvious especially with crossover programs in which David combines differing musical styles and eras. Just such programs were featured at outstanding concerts including the open air concert in front of 17,000 listeners at the Königsplatz in Munich, 2014, as well as his first concert in Mexico in 2014, for an audience of 10,000. Further open air concerts by David took place in June of 2015 including the Waldbühne in Berlin, among others.

David still stays true to his roots, performing purely classical programs time and time again. The years 2014 and 2015 are dominated by the violin concertos by Brahms and Bruch. Invitations by various orchestras led him to the Hamburg Philharmonic State Orchestra, the Czech Philharmonic, the orchestras in Genoa and Naples and to the Israel Philharmonic Orchestra under the baton of Zubin Mehta. This collaboration resulted in the newest CD, “Timeless” with the (only) violin concerto by Johannes Brahms in D-major and the Violin Concerto No.1 in g-minor by Max Bruch. In 2015, David made his debut with the Russian National Philharmonic in Moscow and the RAI Turin, among others. Another important debut took place in May of 2015 with the Filharmonica della Scala under the baton of Riccardo Chailly. Invitations for return engagements include performances with the Vienna Symphony, the Czech Philharmonic and the Orchestre di Teatro San Carlo, Naples. He also performed at the Brahms concerto with Christoph Eschenbach and the London Philharmonic Orchestra in November 2015.

He also went on an extended tour together with his piano accompanist, Julien Quentin, performing the three violin sonatas by Johannes Brahms. Tour stops included debuts in Paris, Lyon, Istanbul and Luxembourg.

After two classical albums, 2015 also saw David return as a crossover artist with a new album Explosive – a combination of pop hits, classical greats and his own, unique compositions with 11 originals being included on the album. Contemporary Pop hit covers include ‘Dangerous’ (David Guetta), ‘Lose Yourself’ (Eminem) and ‘Thinking Out Loud’ (Ed Sheeran) and transforms songs by Michael Jackson, Miley Cyrus and Metallica. The album was recorded at Electric Lady Studios in New York which was previously used by AC/DC, Jimi Hendrix, Guns & Roses and John Lennon. Many of the tracks are infused with high-spirited, upbeat rhythms – “I think that is what the album is all about”, says David, “a fun, positive, high-energy record”.  Touring through 2016 and 2017 with the album David continues to provide thrilling energetic performances wherever he performs