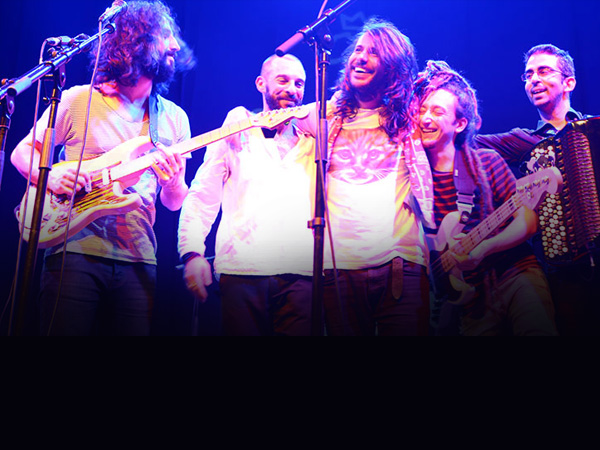 Colomboloco are the most fun you can have in London with or without your clothes on. Prepare yourself for a blitz of eccentric theatricality, wild gypsy beats, virtuoso fingerwork, wanton genre-mixing, lunatic dancing and inexplicable outfits. The devil has 5 new souls on his roster and we invite you to join them in the inferno!

Colomboloco’s show blends fast & furious folk beats from across Europe with classical opera, American swing, ska, jazz, rock ‘n’ roll and chart pop in an epic journey around the globe worthy of Colombus himself. The band’s musicians hail from Italy and Spain, performing in their own languages and also in English, French, Hebrew and Russian.

In 2010, Francesco, from Italy, had a clear idea of the type of band that he wanted to create and so he started looking and listening around to make his dream come true. That’s how he found the other current members of Colomboloco one by one in many different venues of London, and the band composed of Italy, Greece, Turkey and Spain’s most talented and ambitious musicians was then born. Francesco, Ayoze, Luigi, Berdin and Stelios created together the natural on-stage presence and energy that they had all been searching for throughout their careers and journeys. Their shared passion for genre-blending musical adventures and theatricality draws its inspiration from the unique backgrounds of each member: Francesco’s classical operatic training, Stelios’ immersion in the Greek classical scene, Ayoze’s mastery of Flamenco and Afro-Latin rhythm, Luigi who is the Jazz soul of the band and Berdin’s traditional Turkish music.

Since then the band have whipped crowds to a frenzy in many of London’s top live music venues and elite clubs, including the Royal Festival Hall, Southbank Centre, Dalston Passing Clouds, Brixton Hootenanny, Wilton’s Music Hall, Buskers Bern, The Secret Garden, Diakonisches Werk Hannover, The Roof Gardens, Annabel’s, Shoreditch House,  Mandarin Oriental, The Dorchester, the Bassoon Bar, the Tramp, Argo Jazz, and many more. They are firm favourites on the UK and Europe festival circuit.

Colomboloco have collaborated on stage with guests including Shingai (the Noisettes) and renowned opera stars Joseph Calleja and Emma Marrone. They released their first album in 2014.