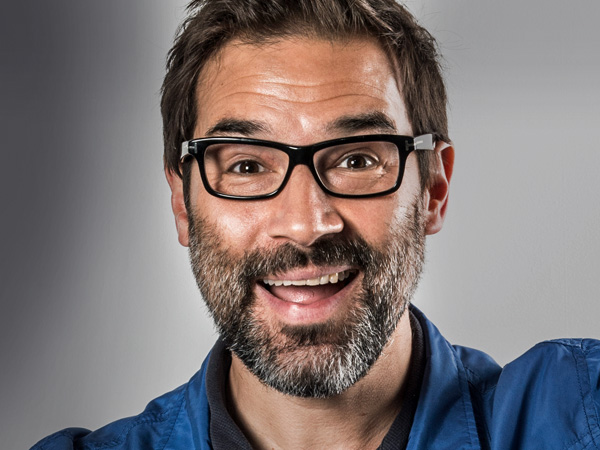 Adam Buxton is a British comedian, actor and director who has appeared in films such as ‘Hot Fuzz’, ‘Stardust’ and ‘Son Of Rambow’ as well as a variety of TV shows in the UK.

Since 2007 he has hosted ‘BUG’, a bi monthly live show that combines music videos and comedy that became a TV series on Sky Atlantic in 2012.

Along with lifelong friend Joe Cornish he also is one half of award winning TV, radio and podcast duo Adam & Joe who have worked together since 1995.

Adam Buxton is best known as half of the Adam & Joe double act, whose cult Channel 4 series, supposedly shot in their bedsit, ran from 1996 to 2001.

He met Joe Cornish at London’s Westminster School and developed a friendship based around making short comedy videos, some of which they submitted to Channel 4’s Takeover TV in 1994.

They were subsequently invited to host the programme before being given their own show, which was most famous for its recreation of Hollywood scenes using soft toys.

Adam’s s biggest solo achievement has been co-writing and starring in the E4/Channel 4 mini-series The Last Chancers, about a fledgling rock band in Brighton.

He also took his character show I, Pavel – about a temperamental avant-garde artist – to Edinburgh in 2005.